Most of the time, a scuba diver who panics will be probably be lucky enough to escape without injury. But that is not always the case, because panic is a state that makes people do strange things. The instinctive actions of someone in a panic underwater can make them a danger to themselves or other people. So what happens if you panic while scuba diving?

A diver in distress may unconsciously remove vital equipment, for example throwing out their second stage regulator or pulling off their own mask.

Rush to the surface

A diver who is in an advanced state of active panic is likely to make an unplanned and rapid to the surface. They will not be monitoring ascent rate, and so put themselves at risk of significant injury

A stressed diver will tend to breathe shallow and rapid, so there will be lots of exhaust bubbles. This type of breathing tends to accelerate panic. In contrast, a diver in passive panic may breathe very little.

The lack of awareness of a diver in passive panic means they are not paying attention to buoyancy. They may sink, leading to a fast descent, or float, leading to a runaway ascent.

Did you know that a diver in a heightened state of fight or flight can be so fixed on survival that they instinctively make actions that impede their own rescue and put other divers at risk? For example, grabbing onto a rescuer or pull out their regulator .

Panic while scuba diving can be avoided

Our behaviour is never fully predictable, but we can reduce the risks by understanding the reasons people panic while scuba diving. For most people, it is a case of finding good training, learning the correct skills and gaining experience and practice within an appropriate environment. 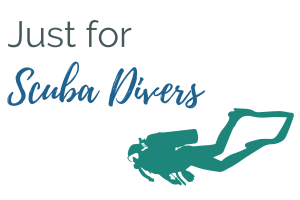