There is something I do that I don’t talk about very much, (partly because I’m not allowed to!). I’ve been working with individual divers who have somehow gotten stuck with their scuba diving. For example anxiety or panic at a particular depth, fears or specific phobias and sometimes distressing experiences in diving. Often the issue is really quite frustrating for them. Usually they’ve tried various ways to get past it, but just seem to get more stuck. By the time people get in touch with me, they are really getting concerned that they won’t be able to dive because of the issue. Psychology can help, and a psychologist diving seems to make a difference.

A psychologist in diving

As a Clinical Psychologist, the issues that people are having are well within my training and experience. Because I have an obsession a specialist interest in dive psychology, I apply that to a diving context. It’s pretty rare that a psychologist specialises in working with scuba divers. In the past, there would be so few people needing this support in the local area that it just wouldn’t be worth all the extra reading and training. But now we have internet – so I see people for video consultations. This means I’m meeting more divers who are experiencing similar issues, so able to develop my own skills.

As I already mentioned, confidentiality is a big part of the reason I’ve been so quiet about this. I do gain consent to keep and publish anonymous cases, which is useful to inform psychological work with divers. However, anything shared from this would be limited, and fictionalised. Also, understandably, people value talking about the issue in private, and so there are no public reviews.

But, having offered this service for well over a year now, I can talk about why it matters that a psychologist is a dive professional when the issue is affecting scuba diving. The list is actually very long, but here are just a few.

It saves a lot of time!

Can you imagine trying to explain a problem you have underwater to a psychologist or therapist who has never dived? You’d need to take time to explain how the kit works, what it’s like to breathe from a regulator, what the limits are, how stuff is organised, what sensations there are, how deep you go … I’ve been diving since 2007, in various parts of the world, I’ve tried a few different kit configurations, so I can get the picture much faster.

So, I’ve asked non-diving colleagues about this, and they don’t know what deep is. Is it 4 metres, is it 40 metres – that all sounds deep and potentially risky if you are not a diver. And what is risky for who? For example, an open water with 4 dives at 30 metres is a different level of risk to a technical diver with 400 dives at the same depth.

One part of psychological work is to encourage people to challenge themselves, expanding a comfort zone, while managing risk. A non-diver isn’t aware of the agency standards and the limits that apply due to the laws of physics. As a diving instructor, I know the rules (or where to look them up).

Knowing how psychological and physical processes are affected underwater

Things are different underwater. Our perception is affected, what we breathe is different. I’m aware of gas density effect, narcosis and hypercapnia – these can be highly relevant. Even thought the research on this is still in it’s infancy, there are studies and theories that are useful to bring into psychological understanding of what is causing the problem.

I’ve asked non-diving colleagues, one response was – “what’s a chamber?” Of course, it’s not that the therapist needs to have experienced the rescue, or been through something similar, it’s just that it helps to have an awareness of what the diver will have experienced.

Diving involves so many sensations, like how a neck seal feels, how it feels to move in a drysuit, feeling wet but not wet under the water, the feeling of breathing, or not being able to catch your breath underwater… a non-diver can imagine, but it’s a barrier.

There are lots more reasons, and probably some I haven’t noticed yet. A final one I want to highlight is that I get what it means to be a diver. We breathe underwater and see stuff other people don’t. I can see the problem the person is facing through diver’s eyes. 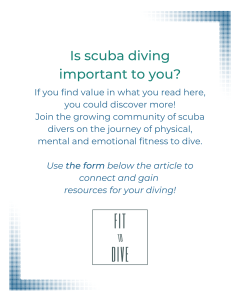